Painting has been my passion since I joined lycée. Inspired by a stimulating teacher, Mr. Van der Spek.
After having spend two years in the Far East for a shipping company I joined the  ‘Vrije Academy of Modern Art in The Hague, Netherlands’ (1965/1966)
Sculptures in plaster and impressionist paintings was the focus..
I concluded it was not going to be my future by making a living as an artist.

Instead I became a pilot in the Royal Netherlands Navy and studied at Leiden and Delft Universities to become a lawyer with an MBA. After 10 years as a pilot I work for 25 years in the international financial industry.
Prior to my retirement I went back to sculpturing and painting. Partly in France ( Grimaud/ Saint-Tropez) and partly in my home town Oegstgeest (next to Leiden) in Holland.

In 2001 I joined the ‘Maison des Arts’ and Maitre Sculpteur Michel Mourrier in La Croix Valmer (France) to master marble as material. After my retirement from the international business arena in 2003 I did spend more time in France and at the Maison des Arts. Michel became a friend. He introduced me in Carrara (Italy) to one of his associées who had a sculpture school in the middle of the white marble quarries.
And I shared my welding skills with Michel, stimulating him to create in stainless steel. 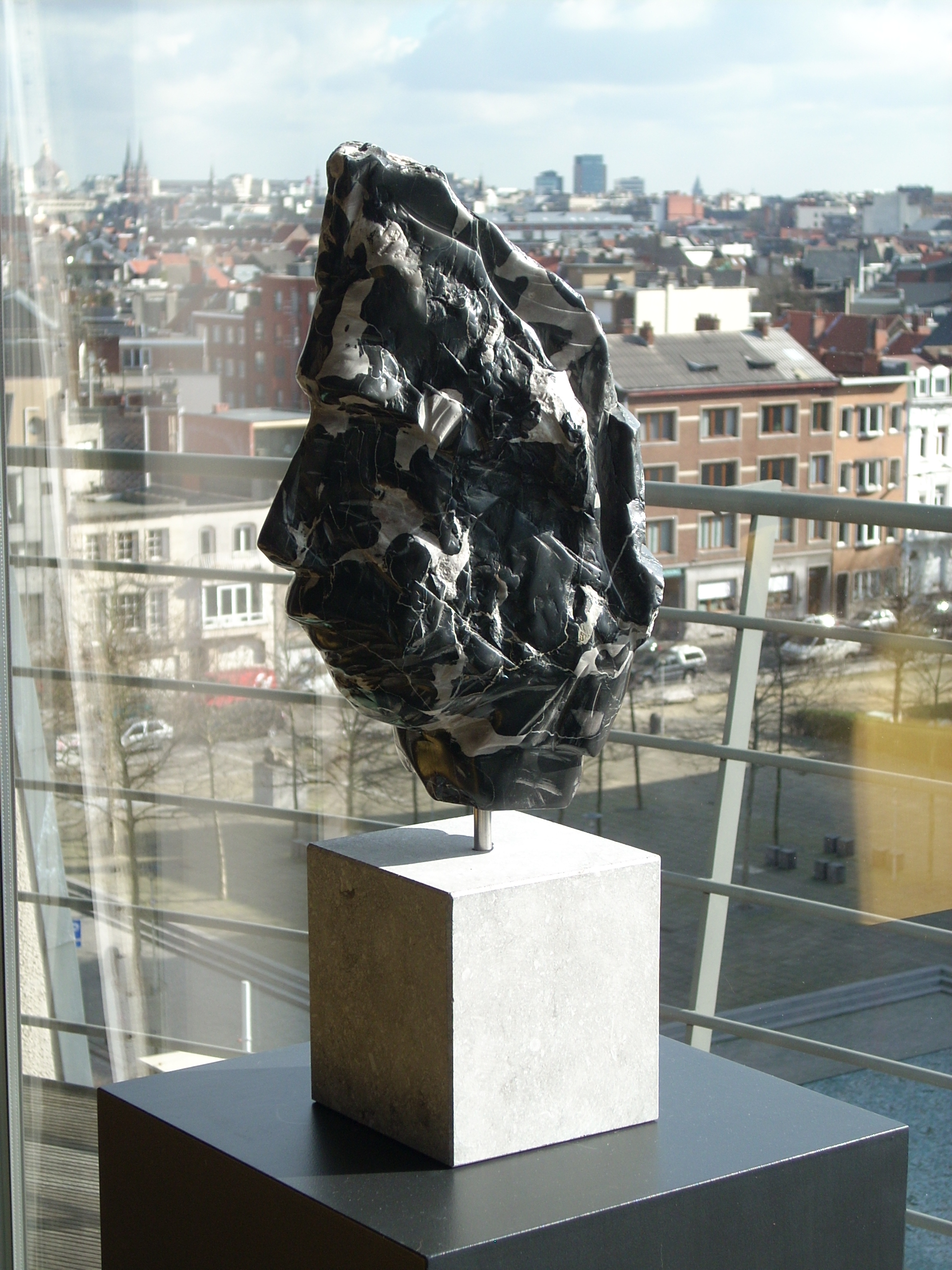 I had learned some basic welding skills during workshops at Delft Technical University.
In 2002 I qualified as a certified welder for car repairs. I added the skills for welding stainless steel (Inox) in 2004 after being introduced to Martin De Kloet of Gebr. De Kloet in Kortenhoef, Holland.
This small enterprise has a specialised inox atelier, run by Brian Dikke. We created quite a few sculptures in inox. A selection was shown in 2007 at the Florence Biënnale and received public attention in the local Florence news paper.

Given my gained experience I accepted the challenge in 2010 to create a monumental sculpture expressing the merger and ambition to grow of  Friesland Campina Dairy Corporation in Amersfoort, Netherlands. After talks with the board and leading management, the design and basic modelling, Brian Dikke, Martin de Kloet and his team were my sparring partners in realising this major project. 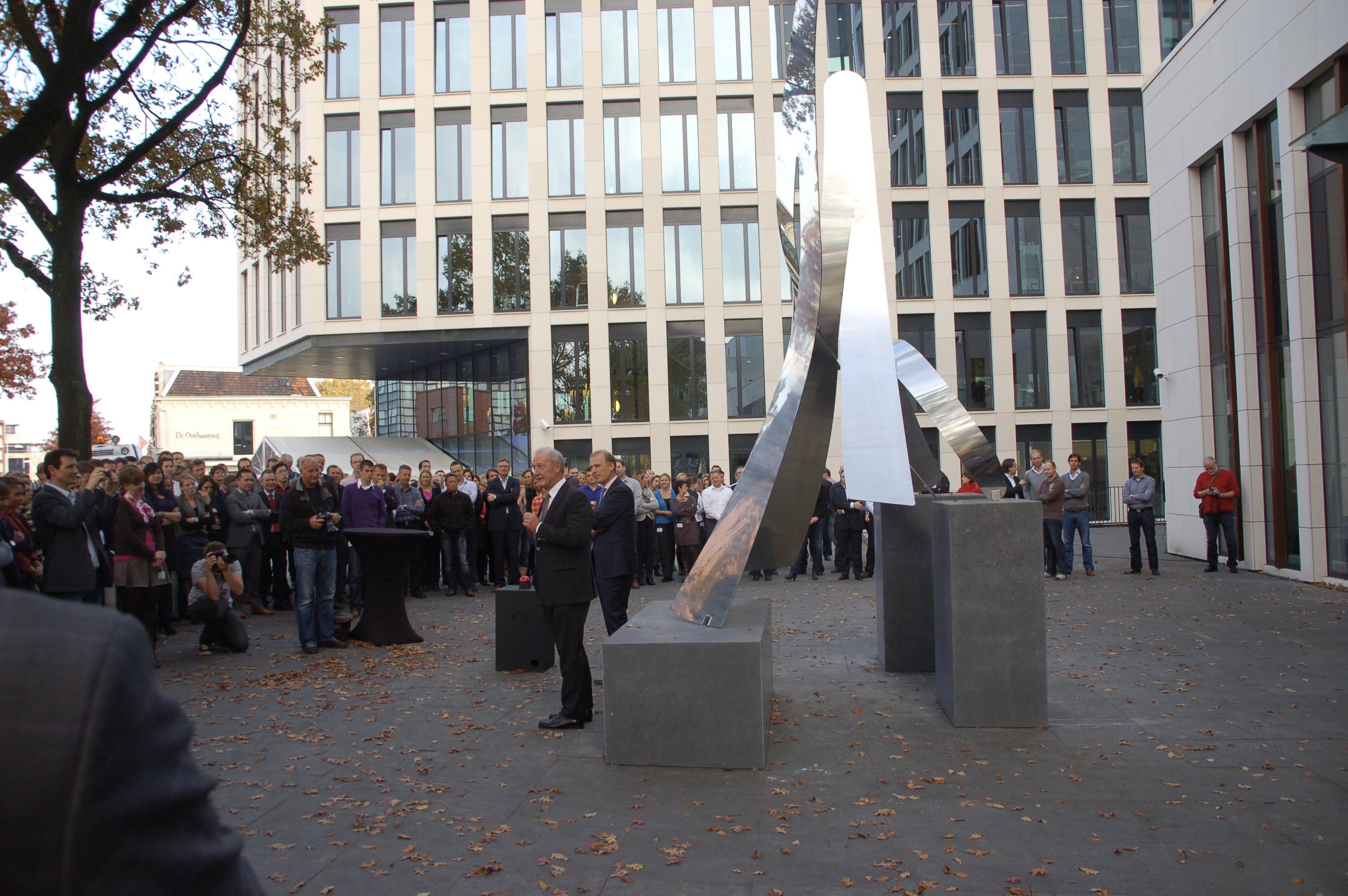 The offical presentation of ‘Ambition & Dynamics’
(In front of the FrieslandCampina head office in Amersfoort, Netherlands, 2011)

Sculptures in Bronze and mix techniques

Around 2006 additional demand for a copy of my sculpture ‘ Loone in Belgian black stone’ ( see Early work) led me into the castings and copying in bronze.
It opened the horizon to start creating in bronze according to the method ‘Cire Perdu’.  Jaap Kleinstra in Amsterdam was my “master of bronze and patinas”.
It also led to the experiment of welding stainless steel and bronze together. A technique I applied for the sculpture  ‘Academic Freedom’ for the Leiden University, which was commissioned in 2011. 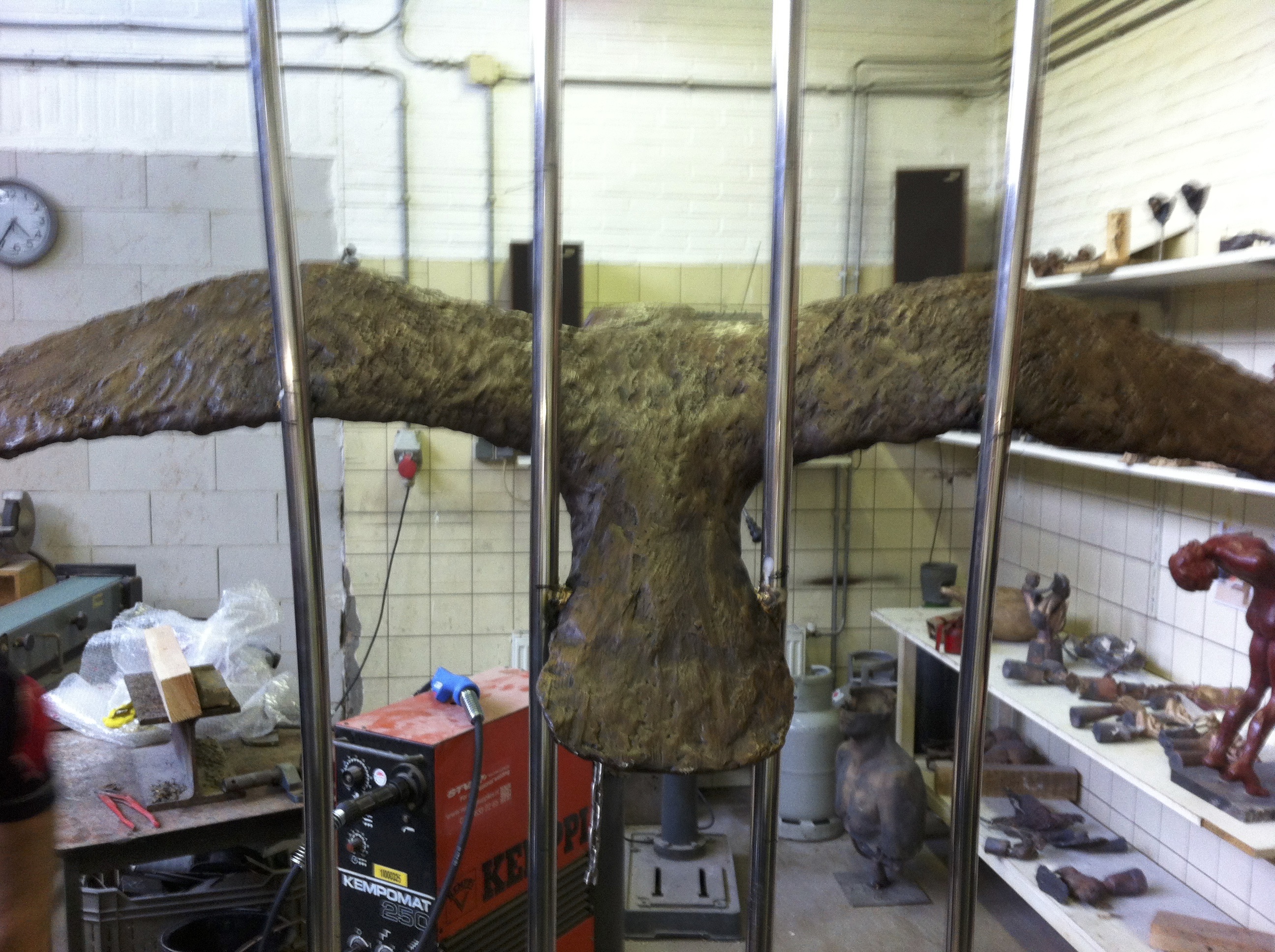 With Brian Dikke at work at Gebr. De Kloet, Kortenhoef

Stainless steel 316 is fascinating.
It is the hardest, the softest, the most fulnerable, the most durable and the most rewarding material, due to mind boggling reflections. 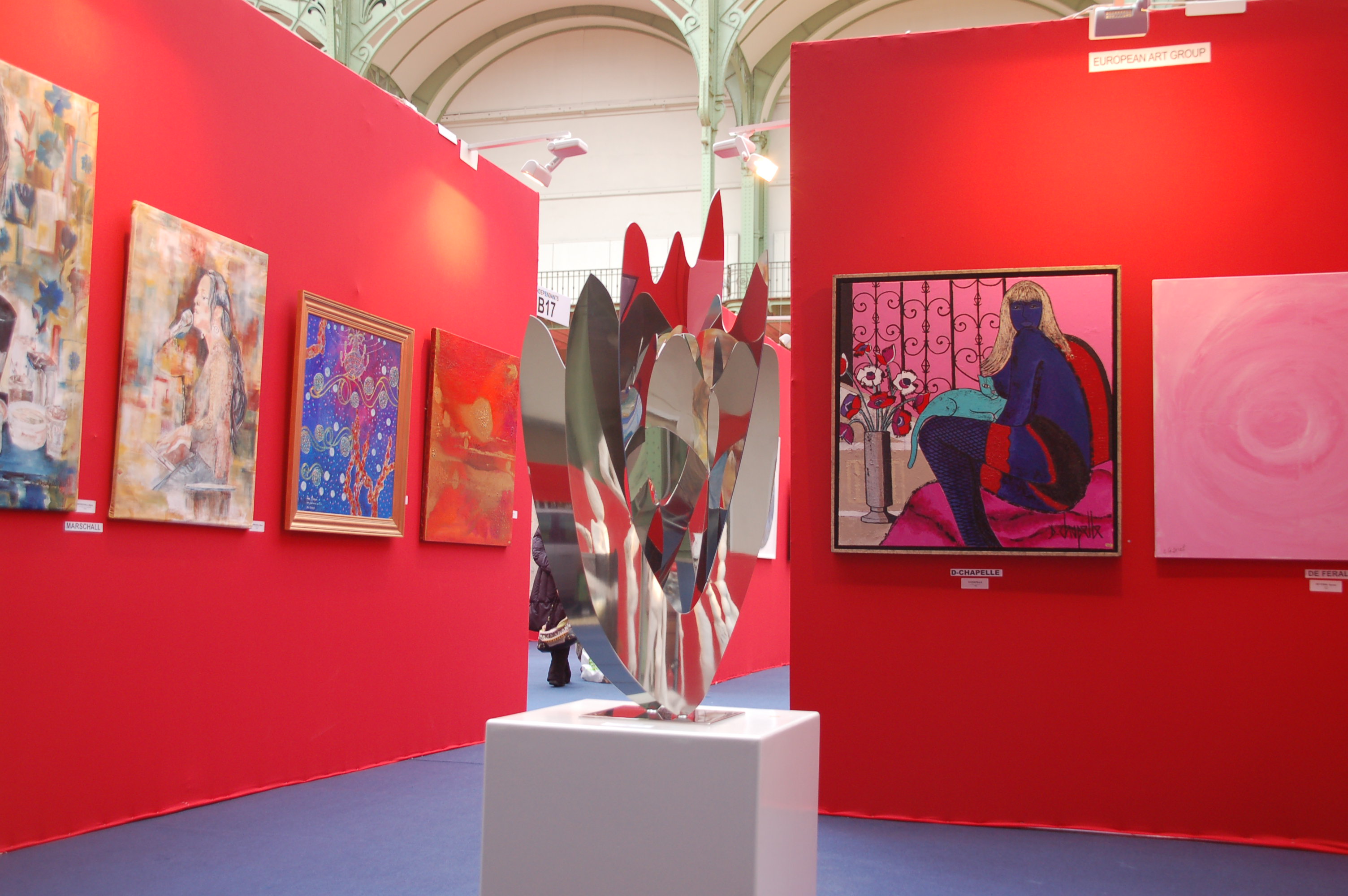 Tulip and Galaxy at the Grand Palais in Paris during ‘Art en Capital’ with Dominique Chapelle, then the Président of the Société des Artistes Indépendantes depuis 1884. This old society of artist invited me to join them in 2009. 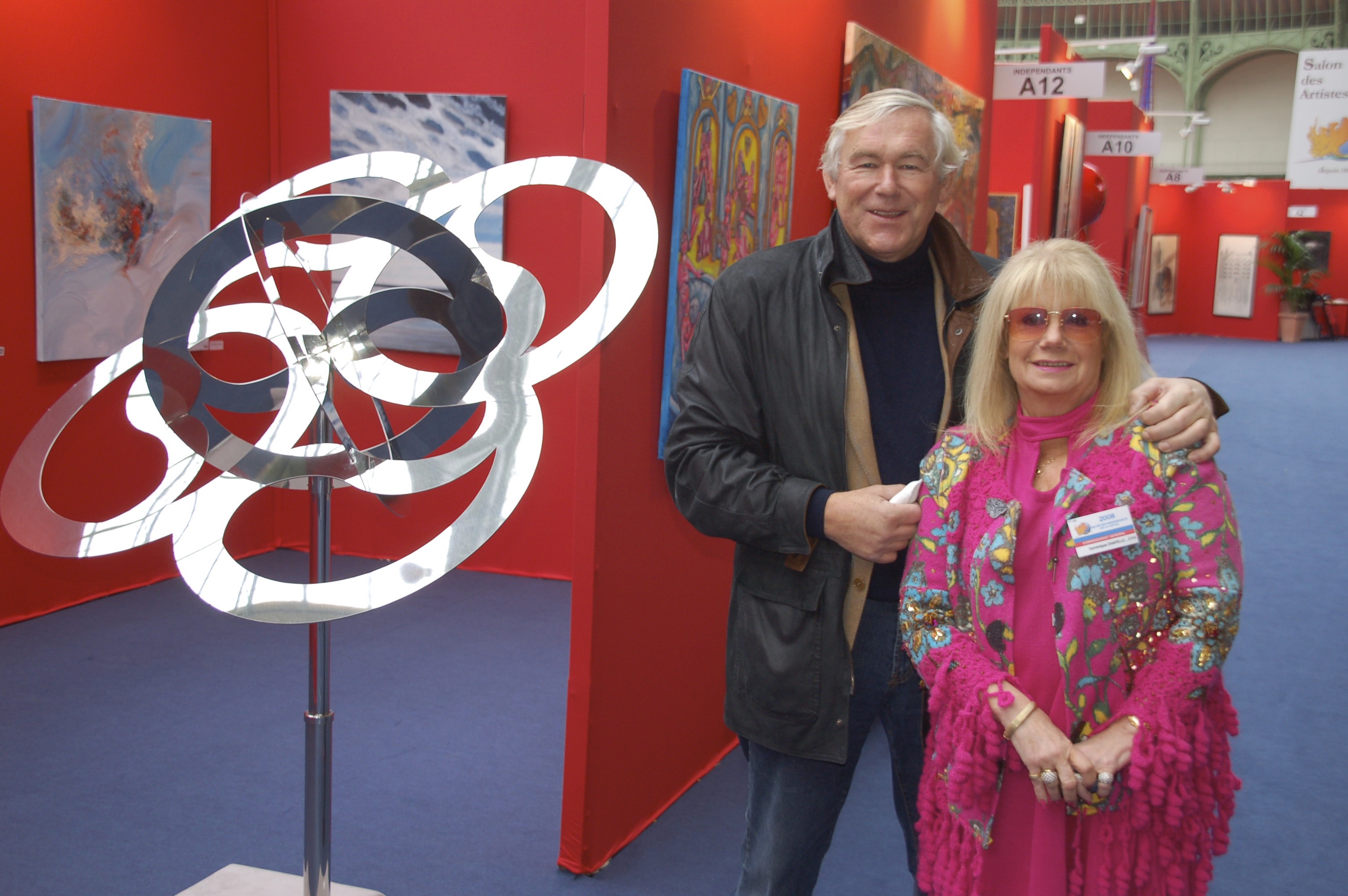 From 2008 – 2014 I showed my work preferably in Saint-Tropez and in Paris.
Spending the days during an exposition in Paris generated the “Paris feeling”  as an artist. With a magazin de bricolage opposite my simple hotel in the 16th Arrondissement for my needs of basic materials and a favorite Brasserie around the corner where the Django Reinhardt sounds revived during the late hours.

Many exposition in Paris followed. ‘Art en Capital’ at the Grand Palais, ‘Art Shopping’ at the Caroussel du Louvre, Salon d’ Automne at Anteuil and several expositions in galeries .

The majority of the expositions were organised by our ‘petite Presidente’ Dominique Chapelle and my friends of the Société des Artistes Indépendantes Depuis 1884.
They adopted me as an Associée. In the wake of Cézanne, Braque, Van Goch and many other known and unknown artists we drank Dutch Corenwijn and ate my cheese from Rembrandts home town Leiden behind the curtains of the Grand Palais. 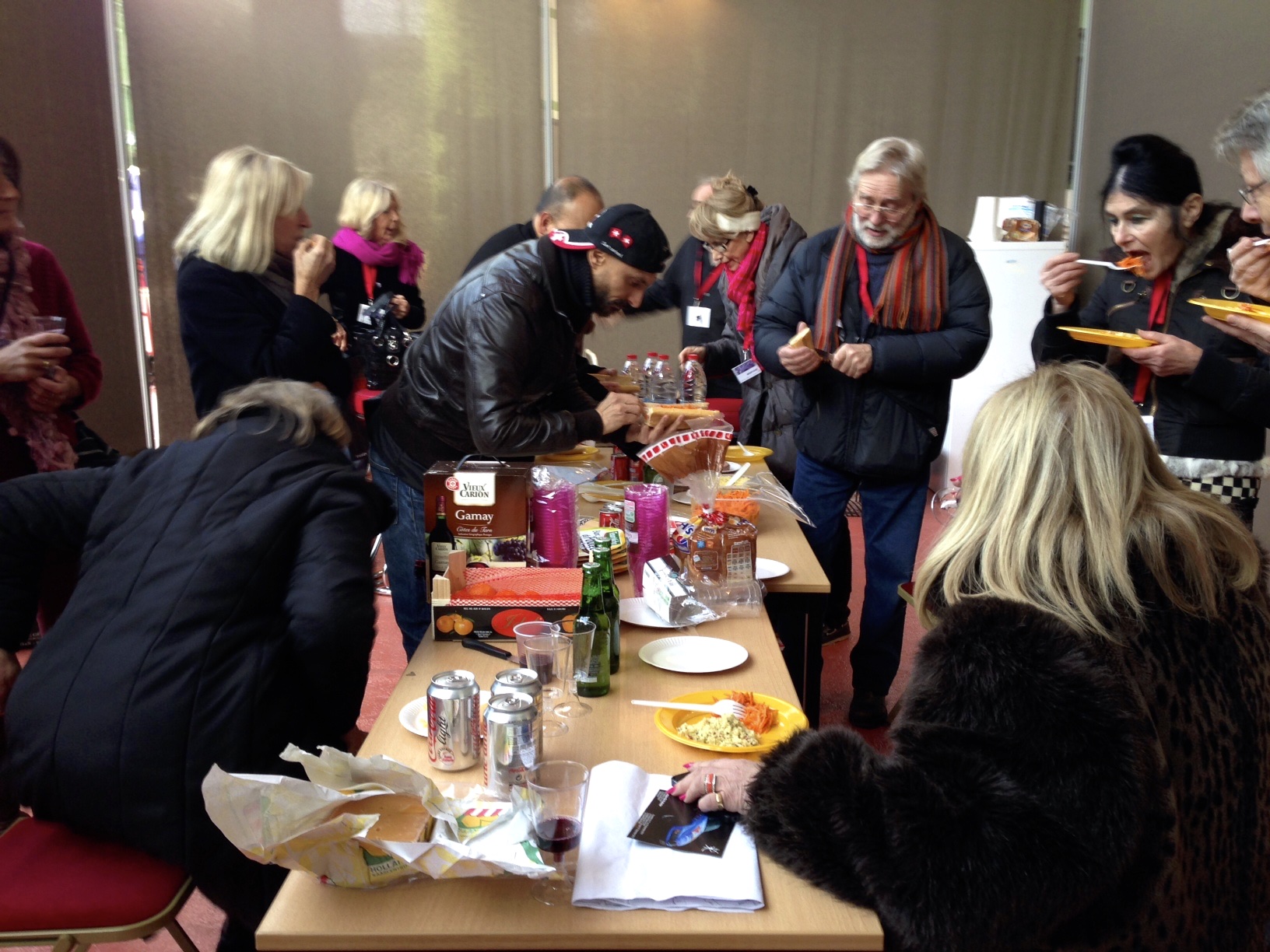 The same applied for my art friends in the Saint-Tropez area.
Michel Mourrier, Céleste Bénite, Daniëlle Mittelmann and Cécile de Kock in particular.
I participated with them in many Salons de Grimaud, the annual Salon des Peintres et Sculpteurs de Saint-Tropez and at other expositions in the south of France.

The exchange with art friends from my home town Oegstgeest in Holland (Art Association INSTOCK) was another high light. We were “Honorary Artists” in Grimaud. The French friends came in return to Oegstgeest for an exposition at the town hall and at the local INSTOCK galerie. With the Mayors of Oegstgeest and Grimaud involved.

Next to applause and happy customers, I did receive more formal rewards as well. 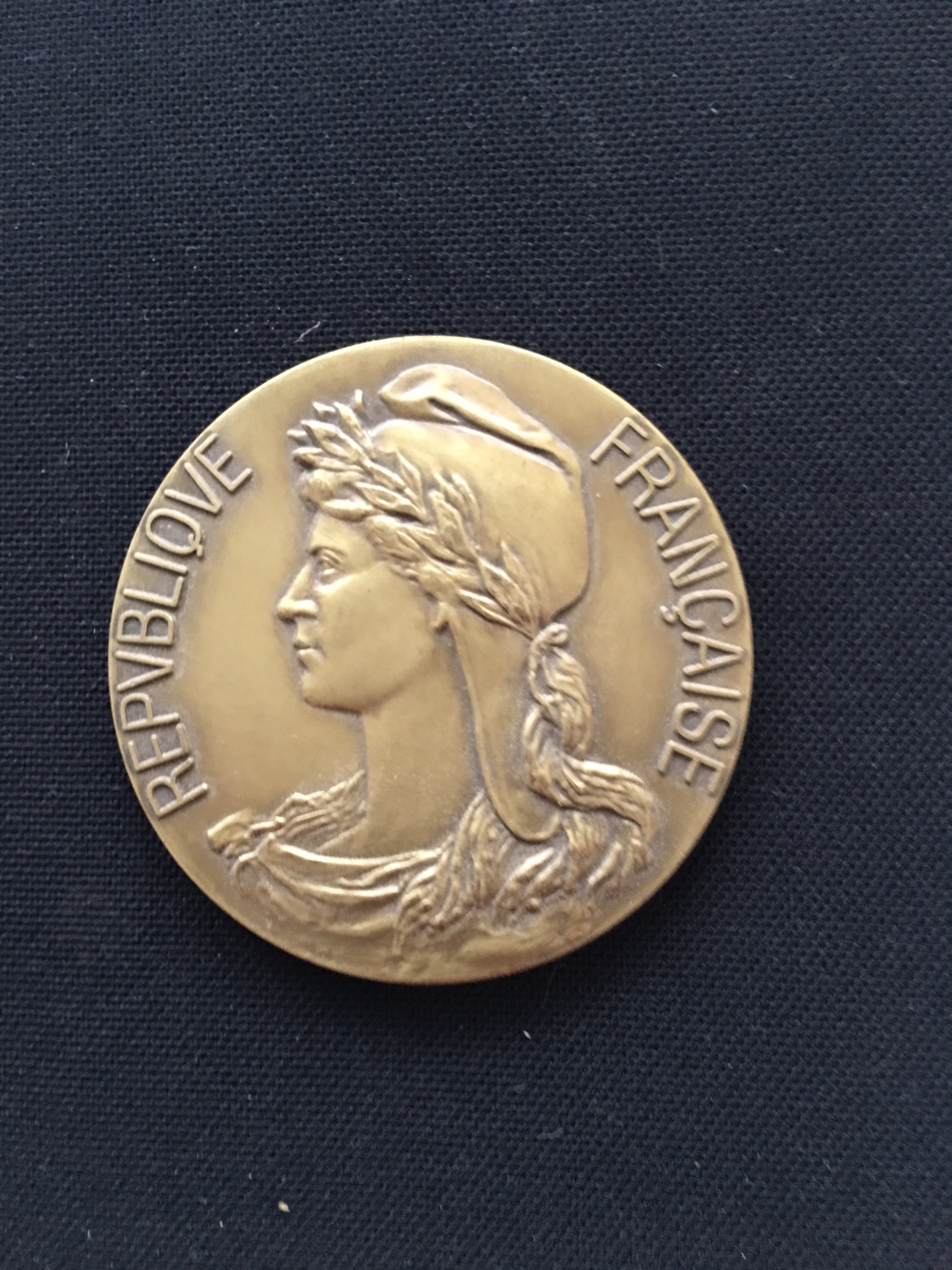 In May 2009 I was invited to come to Rome to present my work at the annual exposition of the ‘Accademia Internazionale d’ Arte Moderna’.
Much to my surprise (and pleasure) I received the golden ‘Medaglia Al Merito 1e Premio’ of the Accademia for my ‘ oeuvre’ out of 15 pre-selected European sculptures. I still wonder who had promoted me.

In the mean time many creations in stainless steel, bronze and combinations of both metals followed my monumental work.

The quest of my artistic path led me in 2015 to the making of 3-D paintings or collages in metal.
Manhattan East River was the first one. It became the beginning of a serie which received a warm welcome at the Salon de Grimaud in September 2015.

Manhattan East River (2015) Collage in steel, copper, bronze and gold blades on a canvas/board
(Acquired by a French art collector)

In 2018 I won a public offering by the Municipality Wijdemeren.
The merger between the once rather hostile neighbouring communities Kortenhoef and ’s Gravenland.
I presented their history and future in the form of a tree in stainless steel with a mixed flock of birds.

(At Gebr. De Kloet, creating the “merger tree” of Kortenhoef – the crows –  and
‘s- Gravenland – owls and kingfishers )

We now have 2022.  COVID-19, Covid Delta and Covid Omicron have dominated our lives since early 2020.
However….. for an artist who has his own workshop as a safe haven, life just goes on.
Inspiration and creating never stops.
I make drawings when it rains and I am welding new birds in steel for our garden. And ‘ work in progress’ for the 3-D Erasmus Bridge in Rotterdam is just finished. (See Latest News and 3-D paintings) 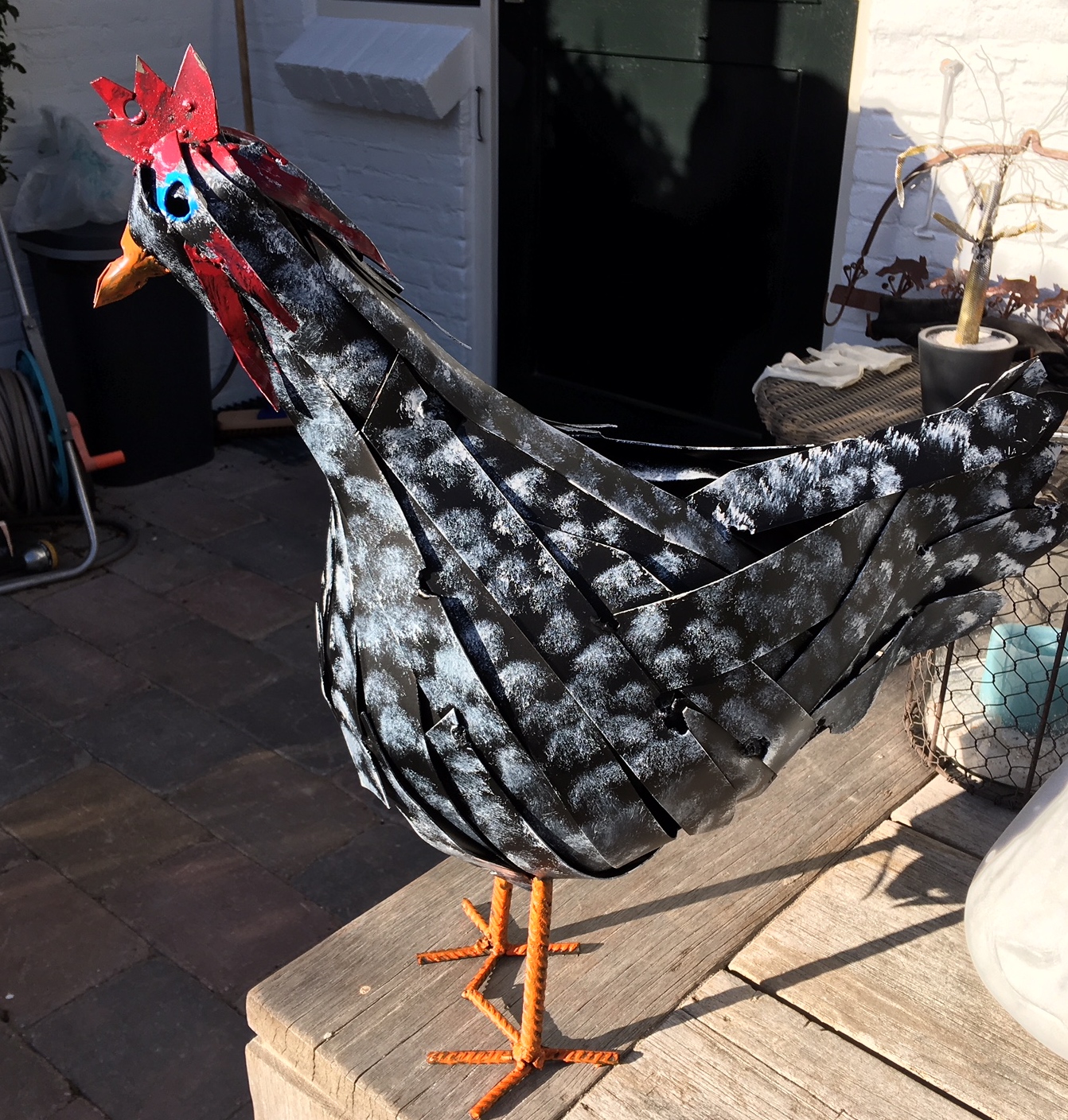 And when the sun is shining I go sailing. Due to COVID-19 the good old Finn is back on the local lake as ‘one man in a boat’ favorite. It was a good excuse to make and donate a new annual prize for the newly formed local Finn Club of Royal YC De Kaag.